As I was growing up, gardening was a prevalent and important part of life. Both my parents had survived The Great Depression on the family farm, although one was in Tennessee and one was in Arkansas and, excluding a few annual bedding plants in a too hot, south-facing flower bed, gardening meant food. Summers were filled with making jelly, silking corn, shelling peas, and canning tomatoes. Lots of work!

Papa's favorite thing to grow (and eat) was the tomato. For months, he planned. Which ones? How many? What method? If he wasn't saving seed, he was planting, bonneting, suckering, staking, tying up––all those things you do to tomatoes to ensure a delicious and bountiful harvest of those glorious red orbs. I was the "fetcher, hander, and holder" the disinterested party, the one who would have much rather been listening to the Beatles, Michael Jackson, or James Taylor on a record player than helping do anything in the tomato patch. If one can grow to resent a tomato, I did.

Let me pause here to say that I did and DO love to eat them, too.

By mid-July every year, we had enough tomatoes for Cox's Army. My mother blanched and juiced and canned, if it could be done to a tomato, she did it. Still, we had enough to share "a sack of tomatoes" with anyone who might need or want them. Family would come from out of state and leave with tomatoes.

When I grew up, married, and started housekeeping, I wanted to garden––in flowers! I had no interest in vegetable gardening. Give me hydrangeas and daffodils and lilies! I forsook the prized tomatoes of my youth and chose to turn the dirt for blooms.

Fast forward 30+ years to last spring. I began to toy with the idea of a small vegetable garden. Our Amish neighbors create the most beautiful garden every year. Perhaps we should try it. But days turned into weeks, weeks into months, and, alas, that window closed.

Ah, but spring rolled around again this year and, once again, I got the fever to dig in the dirt. Earlier than usual I got some flowers in the ground, felt accomplished.

Then, just last week a video popped up in my Facebook feed. The patriarch of Yum Yum Gardens, a family farm not too far from me, had created a video of the ABCs for growing tomatoes organically. I was hooked. I showed it to my husband and he was hooked. We made our plan and couldn't wait for the weekend.

Friday evening, after dinner, we began to gather supplies. According to "the man", we would need:
and, of course, tomato plants.

First stop was our local Tractor Supply where we found the first three ingredients on the list, but no tomato plants. As we were checking out, the man running the cash register told us his long tale of woe regarding his many unsuccessful attempts at tomato gardening and the fact that he had finally given up. As we were walking out the door, I turned and said, "You didn't touch any of this stuff we just bought, did you?" I smiled and, after a beat, he said, "I don't think so. I sure hope I didn't jinx it for you."

After Tractor Supply, we hit the local WalMart with fingers crossed they'd have the plants. Surprisingly, we had choices.
All were Bonnie Plants and I even recognized
some names from my childhood. We are
starting small, friends. We chose three
varieties and two plants each.

This morning we prepared the ground
and followed the Garnett protocol for planting Early Girl, Bonnie Original, and Better Boy. I was a little concerned that we  might be starting too small, but the reported yield on these plants is very high.

Wish us luck. If only to honor Papa's memory, I hope we wind up with enough tomatoes for Cox's Army.

Email ThisBlogThis!Share to TwitterShare to FacebookShare to Pinterest
Labels: Home and Garden

in the pink*
phrase of pink

Today began in the pink. 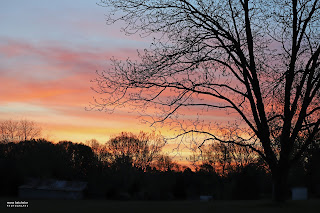 Rarely do I see a pink sunrise without hearing my mother say,

Sure enough, the forecast calls for rain starting tonight, so we decided to load up and head to one of our favorite hiking spots in search of yet more pink.

Pilot Knob, is situated on one of the highest points in West Tennessee on the Kentucky Lake area of the Tennessee River. When I was a child, my family would picnic in the stone pavilion at the pinnacle. The structure built by the WPA in the 1930s no longer remains. Today it is the site of the cultural and folklore center. The area became NBF State Park, a part of the Tennessee State Park system, in 1963.

Enough history, today I went in search of Mountain Laurel (Kalmia latifolia) blooms. I had consulted my photographs from last year and discovered that on our April 23 hike they were in full bloom, some past prime. Perhaps this would be good timing. We had climbed the hill to the cultural center and were barely on the trail when I knew my quest was a bust.  The Mountain Laurel were still in bud, and, although they are lovely, would not be at their prime for a week or two.  No matter, we love the Orange trail and were still glad to be there.

I soon discovered that all was not lost in my quest for pink flora. Just a few steps down the trail my eye was drawn to an explosion of "prom dress" pink off to the left. Pay dirt!

Several years ago, when we first began to hike, I saw a flower/shrub/tree at Natchez Trace State Park that I had never seen before nor since, although I learned the name through my research––and there it was, the southern Pinxter Flower (Rhododendron canescens), a wild azalea.

Fingers crossed that I have identified it correctly. 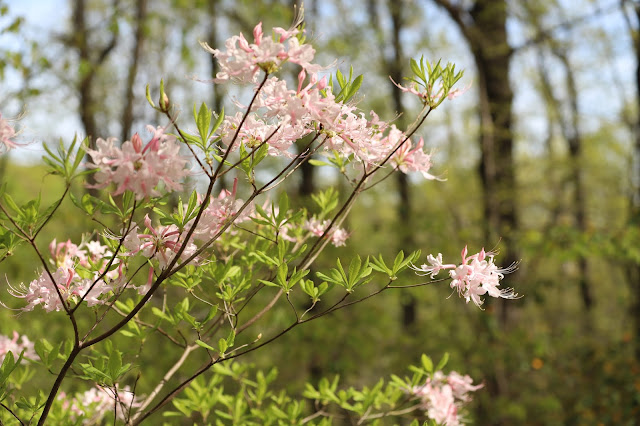 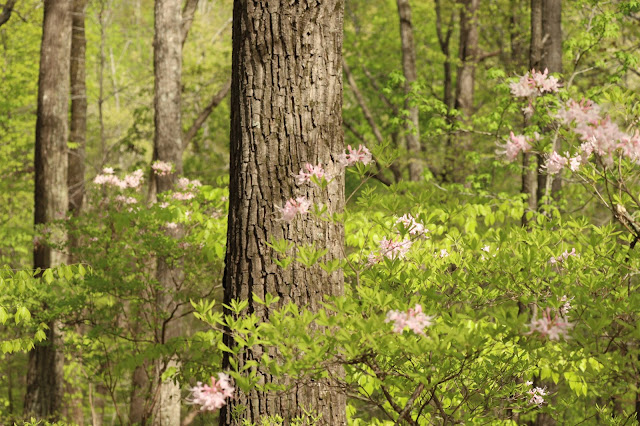 The day was saved by this discovery, but the woods were filled with Spring Beauty, Phlox, Oxalis, and Saxifrage, all of which I've been seeing on the trail for the past few weeks. What I had not seen was the Dwarf Crested Iris. I began to notice blades all along the central section of the trail and finally found one single bloom waiting for me.

Although we've hiked this trail all winter, it is always fun to see the woods awaken, finally. Winter gives us the beauty of an occasional snowfall and the luxury of no bug spray, as well as not having to monitor our footfalls for snakes; however, it can get a bit boring when the scenery is so static. Thankful to live in an area with seasons. Oh, and speaking of snakes, today we saw the first of those, too. Fortunately, it was a friendly.

Here's to hoping you are "in the pink". Happy hiking and Happy Earth Day!

Oh, Virginia. I love your Bluebells.

In March of 2017, we took a little Spring Break hiking trip that included South Cumberland State Park, Fall Creek Falls State Park, the natural bridge at Monteagle, and Old Stone Fort State Park. It was a fun turn around the southeastern area of Tennessee.

When we returned home, I was scrolling through the feed of the What's Blooming in Tennessee Facebook page and discovered someone had posted a shot of an intriguing flower I had never seen, the Virginia Bluebell (Mertensia virginica). I have to say that it ranks right up there with the Passion Flower and Mountain Laurel when it comes to blooms that take my breath away––but I digress. The shot was taken at Old Stone Fort State Park the day before. Needless to say, I was crestfallen. I vowed that if I ever made it back to OSFSP in March, I would find those bluebells and I WOULD take their picture.

Fast forward to Spring Break 2018. The grand plan was a loop that included Max Patch Mountain, Asheville, Little Switzerland, Roan Mountain SP, and Grayson Highlands SP (VA), but as we drew closer to departure, the forecasts for inclement weather in that entire area grew worse. We called it. Those beautiful mountains (and the wild ponies at Grayson Highlands) would just have to wait. We decided to head south, again.

What was our first stop? Old Stone Fort State Park, of course. What was my question for the ranger?

"Where are the Virginia Bluebells?"

We discovered lovely drifts of these amazing blooms in an area of the park we had simply missed in 2017. Were they ever worth the trip. 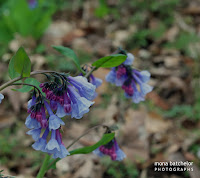 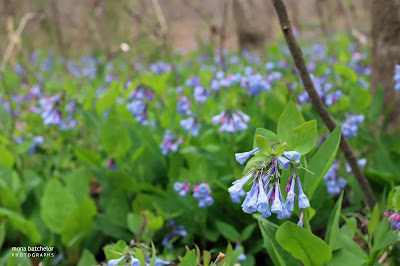 So, this year I returned home from Old Stone Fort State Park and I ordered my own Virginia Bluebells from Tennessee Nursery in McMinnville, TN. Tonight, I put them in the ground.

If all goes according to plan, next March, I should have some lovely shots of them blooming alongside my grandmother's daffodils.

Email ThisBlogThis!Share to TwitterShare to FacebookShare to Pinterest
Labels: Hiking, Home and Garden

Land Between the Lakes: Pickett Loop

We chose to forego our two favorite trails at LBL, Honker Dam and Hematite Lake, to hike a trail that had been recommended by several. We are definitely creatures of habit. Although this trail is fine, and there ARE a few spots that are really lovely, we continue to prefer our regular LBL hikes.

I was able to capture a couple birds and some interesting fungi. Just over five miles on a cold, blustery day.

I have always wanted to create a space to share words, images, and thoughts with friends and family. For the last several years, Facebook has filled that void, affording me a space to create near weekly albums of photographs from our hiking adventures, as well as observations about life, family, and home.

Because of recent events with Facebook, I have decided to begin a blog. I make no promises regarding regularity as life often intervenes when I get too ambitious. I'll simply promise to continue to share our adventures, and I hope you will continue to follow along as you have on Facebook and Instagram (@hikinglibrarian). Here goes!
at April 15, 2018 No comments: